In the aftermath of sexual violence, victims can experience an array of mental, emotional, social, and physical setbacks as they navigate through a traumatic experience. The short film “Walk of Shame,” directed by Emilie Cheung, takes us on a young victim’s journey after being sexually assaulted at a party. Though she tries to carry on normally, she is painfully reminded of the incident frequently, as she even runs into the perpetrator at school.

After portraying the real and often debilitating effects of sexual violence, the film ends with a hopeful reminder for victims:

“It wasn’t your fault. You are not alone.”

“Walk of Shame” is one of ten short films that premiered at the Voices With Impact film premiere on Thursday, June 27 at the Downtown Independent in Los Angeles. Around 200 people attended, including Mental Health Services Oversight and Accountability Commission (MHSOAC) Executive Director Toby Ewing and Commissioners Gladys Mitchell and Mayra Alvarez.

In 2018, MHSOAC, the McQueen Family Foundation and the California Institute for Contemporary Arts partnered with Art With Impact to award ten $5,000 grants to filmmakers to produce short films surrounding the two topic areas of focus: mental health and sexual violence, and mental health and Indigenous populations. The new program, Voices With Impact, gives emerging filmmakers from underrepresented communities the resources to tell stories about mental health issues.

“These short, but very powerful films, give us perspective about the mental health challenges  faced by sexual violence survivors and Indigenous communities,” Executive Director Ewing said. “They convey a very important message, and we must continue to support these groups as they work toward mental wellness.”

Art With Impact, a nonprofit formed in 2010, seeks to forge a creative space for young people to explore and improve mental health by bridging it with art and media. The group accepts film submissions monthly and chooses a winner to be added to their ever-expanding Online Library for Interactive Video and Engagement Film Collection (OLIVE) for use at college and university  workshops throughout the United States and Canada.

From December 2018 to February 2019, the winners worked with partner organizations, mental health experts, subject matter experts and the Art With Impact Program Directors to produce short films, each under 5 minutes.

After introductory remarks from Founder and Executive Director Cary McQueen at the premiere, there were live performances of poems and songs related to sexual assault and the experiences of Indigenous people interspersed between films.

Pieces were performed by Kelly Caballero, a California based actress and singer-songwriter of Tongva, Yaqui, and Spanish descent; Xica Necia, a Nica-Xapinx, queer, femme poet and survivor of sexual violence; and Natalie Patterson, a highly acclaimed African American poet and teaching artist.

At the end of the program, Natalie Patterson led a Q&A session with the filmmakers.

MHSOAC hopes to bring Voices With Impact to Sacramento in the future and to present a couple of films at a commission meeting. 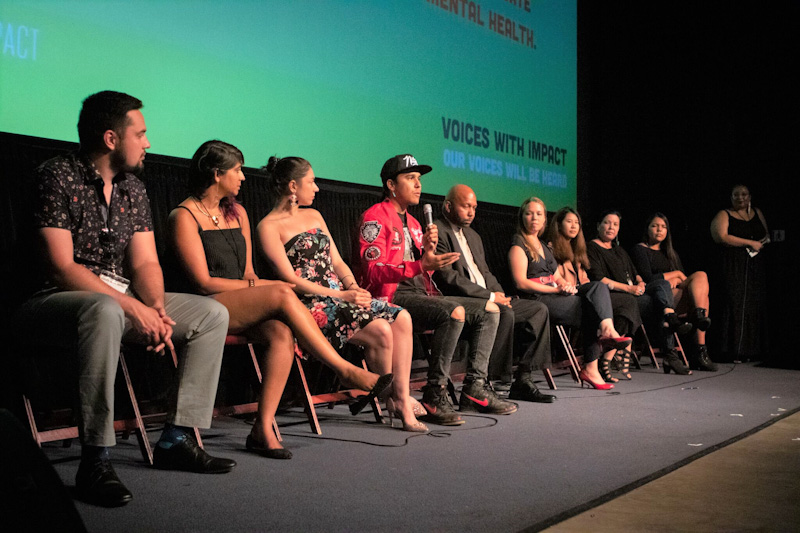