Kelechi Ubozoh, 32, is an accomplished journalist, poet and singer, but the voice she most wants people to hear is the voice she uses to help keep people alive.

“This effort that I’m trying to do comes from my own experience as a suicide-attempt survivor,” Kelechi said. “People often don’t want to talk about it because they think it will pass, but if we don’t talk about it, we can’t save lives. I don’t want people to feel alone like I did.” 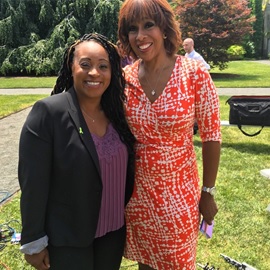 Kelechi, who is an American-Nigerian writer, testified last month at the California Mental Health Services Oversight and Accountability Commission. Kelechi will continue to spread her message of hope on CBS This Morning June 26 where she will be featured on a suicide prevention panel hosted by Gayle King.

“People of color have an additional stigma around suicide prevention so I really wanted to put my face to it,” she said. “I really want to normalize the conversation so that more people can stay here.”

The Commission has been charged with developing a Suicide Prevention Plan for the state of California and has held discussions across the state in the hopes of including as many diverse voices as possible in the plan. Kelechi is one of numerous mental health advocates who have shared their lived experience around suicide and mental health. The deaths of celebrities Anthony Bourdain and Kate Spade have prompted recent nationwide conversations about suicide.

Kelechi first attempted suicide when she was very young. She had moved with her family from New York to Georgia and the huge culture clash was extremely difficult.

“There was segregation,” she said. “There was discrimination and there was racism and I was a different kind of kid. I just felt misunderstood and I just had not connected with anyone and I just wasn’t doing well.”

To help Kelechi, her mother moved Kelechi’s beloved grandmother, Margarite Kendrick, in with them. But when her grandmother died from cancer, Kelechi took it very hard. “To me, my world ended,” she said. “I once heard someone say that suicide is a permanent solution to a temporary problem, but for me, my grandma wasn’t coming back so it wasn’t a temporary problem.”

Kelechi told a friend about her suicidal thoughts and the friend told a teacher who told Kelechi’s mother. “So at the age of 13 and then 14 and then 15, I went through many hospitalizations. It was a truly terrifying experience.”

Kelechi described many extremely disturbing experiences in her numerous hospitalizations. Some of those experiences are hard to imagine. She has been a strong advocate for mental health in part because of her experience in those psychiatric situations. She was featured in an award-winning documentary, the S Word, which strives to end the stigma and silence around suicide. The S Word can be found at https:// theswordmovie.com/. She also co-wrote a book We’ve Been Too Patient, which will be released by North Atlantic Books in June 2019.

Kelechi acknowledges that her experiences with suicide attempts and mental illness are different than those of others in part because her mother was a doctor who provided resources and support that many other communities don’t have. She encourages the Commission to include as many diverse voices as possible in its suicide prevention plan because everyone experiences mental health issues differently.

“I think I represent a small portion of folks, but I recommend talking with people that aren’t in the mental health system,” she said. “Bring people in that aren’t at the table. Do a better job of partnering with churches and have campaigns that actually go to where different people are. We need to take it to a place that isn’t our own backyard.”

She stressed the importance of including all communities of color, including the transgender community. “The more voices you bring, the better the ideas. Family members also should be included so that people can feel like they can actually do something,” she said. “And also, fund those suicide prevention telephone lines. They are severely underfunded.”

When asked about her experience on CBS This morning, she said it went really well. “It was amazing that she (Gayle King) had the panel,” Kelechi said. “It was amazing that she was having this conversation and that she’s giving it a space. She also wanted to say that it isn’t just movie stars. It’s your grandma, your sister. Everyone is touched by suicide, but we just don’t talk about it. I’m glad she’s bringing awareness to that.”